The following is a continuation of “Tales of the Irish Civil War- 1922” by
Dick Hornidge of Tulfarris.

“I was walking with Betsy on the brow of the hill that arose steeply behind Tinode. To the east, under a scattering of white clouds, the heather covered peak of Mullaghcleevaun reached through the mist that shrouded Ballyknockan Bog.
Suddenly, a small rabbit with a white tipped tail darted from behind a bush and scampered down the path in a series of zigzags. Then came Betsy, nose to the ground, her long ears dragging in the dew laden grass.
“Betsy! You’ll never catch it. Come on back before you have a heart attack,” I cried.
She flopped down on the path, gasping for breath as I hugged her. Betsy was my faithful companion when I visited my grandparents. Together we explored the wildflower-covered hillsides and the shadowy paths that wound through the dense woods. At night she slept on my bed and at mealtime sat hopefully by my chair.

We ran down the hill, my wellingtons making sucking noises as I pulled them out of the mud. The tall chimneys and gray slate roofs of Tinode appeared when we rounded the next bend. My grandparents’ home was a stately, three-storied Victorian building nestled into the hillside with a sweeping view of the valley below. The carefully tended lawns and gardens and reforested hillsides gave me a comforting sense of order and permanence. I could not imagine a world without Tinode. I enjoyed exploring the many rooms and passageways of the house. When I walked down the long
corridor that led to the library the ancestors gazed down on me from their portraits. Their eyes followed me all the way to the library door. My reading was elementary, but I did enjoy looking at pictures in the English periodicals, many of steeplechases with horses sailing over jumps. The drawings in “Punch” were also fun to look at, but I didn’t understand many of the jokes. My favorite book was the three-volume history of the Indian Mutiny with blood curdling pictures of Sepoys attacking English soldiers. Racing trophies, won by grandfather’s horse Dainty, lined a side table. He was currently on duty with his regiment in Ceylon. When I snuggled into the deep upholstered chair
Betsy climbed onto my bony lap but quickly slid sideways onto the softness of the seat. There was plenty of room for both of us. When I looked up at the shelves of leather bound volumes and the oak paneled walls I felt content and safe.

We continued down the path where the morning sun shone through the overhanging trees and the shadows ran before us. At the end we entered a lane bordered on each side by hedges of blackberry bushes. It led into the yard where a beaten up old lorry stood near the kitchen entrance. A bored IRA trooper, a bandoleer crammed full of bullets across his chest, stood guard. He waved his hand and grinned at me in a friendly fashion.

Puffs of smoke were shooting from the top storey windows, followed by tongues of flame, which quickly grew in intensity. The heat in the upper stories sucked up a giant column of air that surged through the house with a roar. Then the roof collapsed, sending showers of sparks into the morning sky.
Suddenly I remembered : “Has anyone seen Betsy?” I cried, as I looked frantically around the lawn.
Molly replied. “I saw her run to the basement when the door fell in.” The upper floors of the main house were an inferno, but the laundry room part of the basement was not yet threatened. I ran towards the basement door, but only had gone a few yards when I was flung to the ground by a hand grasping the collar of my jacket. The blue eyed man stood over me.
“No one is going back into the house.” He commanded
“But my dog is in there. I’ve got to get her out.”
“No you’re not. Go back to your grandmother.”
I scrambled to my feet and again ran towards the basement door, but was once more flung to the ground. This time the blue eyed man had the revolver in his hand.
“Go back or you’ll be sorry.”
He had not shot Donna when she turned her back on him and walked away. But this time, the hard glint in his eyes persuaded me that he would carry out his threat.
I ran back to Donna, sobbing. It was my fault that Betsy would die in the flames. I blamed myself bitterly for not watching out for her and thinking only of myself.
I watched as flickers of flame, from smouldering pieces of wood, shot into the smoke filled air and the sun, by now well over the shoulder of Mullaghcleevaun, shone down upon the massive granite walls which rose proudly above the rubble. 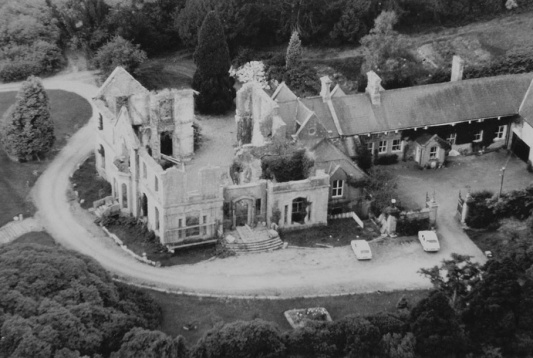 A house with a past and lots of character in Blessington, Co Wicklow. You get a sense of this even as you drive between trees and meadows up the long, long avenue to where Tinode House sits in 300 acres of parklands including gorse-edged fields and woods.

All this even though the original house, built around 1860 for a nationalist member of parliament for west Wicklow, was a casualty of the Civil War, burned down because its then owner W.H.F. Cogan, Esq., M.P. was an ex-British army major.

Just a few years before, in 1914, it was described as having “every accommodation for a gentleman’s or nobleman’s family”. Tinode’s architect, in the 1860s, was WF Calbeck.

It has been partially restored and now privately owned near June Blake’s Garden on the N81.

Various files that may be of interest.